skip to main | skip to sidebar

Two Saturdays ago I woke to find my Windows Phone (Samsung Omnia 7) was on a major go-slow - it was fine for anything not involving the built-in secure SD card, but I couldn't even do a hard reset. The (always excellent) Bath T-Mobile shop agreed with my provisional diagnosis and sent the 'phone back to Samsung for repair, providing me temporarily with a little Nokia 'phone which proved surprisingly full-functional (if you can live without 3G and with a storage capacity of about 50MB, that is).

In the meantime I decided that it was time I stopped evangelising Windows Phone from a position of knowing nothing about either iOS or Android, so I bought myself a 7" Ice Cream Sandwich tablet (Neuropad). An interesting and overall positive experience.


Lots more to do - install and learn Swype keyboard, find better browser, etc. - but overall v pleased with it. However I have seen nothing to make me think I would be better off with an Android 'phone.

Meanwhile after only 10 days the Windows Phone was ready for collection.

Samsung informed us in writing that they had tested everything in sight and 'updated the software to the latest level'. We were puzzled, given the fact that there'd fairly obviously been a hardware fault.

On investigating the 'phone and switching it on, it became clear
a) that this was not my 'phone handset but a rather battered looking replacement they hadn't bothered to mention (so my carefully preserved Zune backup would be useless), and (worse)
b) that, far from being on the 'latest level', it was on the very earliest shipped OS level (7004).
I think the politest way of describing Samsung's actions here is 'economical with the truth'. I can't see that they give two hoots about their customers. I'm as angry about this as I have been with a vendor for a long time - it feels like they're taking both the Bath T-Mobile shop and me for fools.

Anyway three hours, much swearing at Zune, a PC restart, and 4 updates later, I was ready to re-install my apps and get things back to normal.

In summary: much as I love my Omnia, my next 'phone will probably be a Nokia Lumia 900; and it won't be running Android.
Posted by Mandy Shaw at 10:35 No comments:

The #ibmi timeline up to date

Another only recently learned but mega useful SQL trick ...

create table schema/table as (select statement) with [no] data


The newly announced RUNSQL CL command will make the above even more useful, as it will make it immediately accessible from CL. 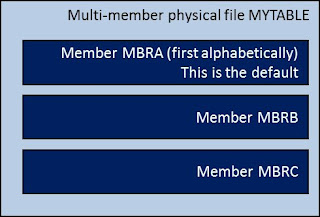 Here's another useful possibility I hadn't spotted until recently.
For SQL access to a non-default member, use an alias, e.g.:
CREATE ALIAS QTEMP/MYMBRB FOR MYSCHEMA/MYTABLE (MBRB)

Mandy Shaw
More about me is at http://www.linkedin.com/in/mandyshaw. Also on Twitter.